The precise origins of raised embroidery (stumpwork) are lost in time, so one can only look back to a period when even earlier embroiderers were working in the narrative style. Using two layers of linen fabric , a cotton wadding sandwich, and white as well as light brown linen threads, Sicilian embroiderers created the narrative Tristam quilt in around 1400. In a series of fourteen scenes of a cartoon strip tells the story of the oppression of Cornwall by King Languis of Ireland, and the battle of Sir Tritam on behalf of King Mark. Writing in the 1920’s Theresa Macqoid suggests that this early pictorial quilting was perhaps the initial impetus to figurative stumpwork embroidery.

This may well be so because within half a century professional Hungarian embroiderers were incorporating raised embroidery into their sumptuous ecclesiastical apparel, and in 1574-75 we would have found Wolfgang Popp busy in his German studio creating Das Salzschiff, a guild shield which illustrates three figures in high relief about to land barrels of salt on the banks of the river Donan in the German town of Passau. Using wire, wax, wood, horse hair, metal threads and brocade like fabrics, he was creating professional raised embroidery in the stumpwork style.

Concurrently, in Elizabethan England embroiderers were exploring the rich and exciting qualities of detached buttonhole stitch, which lead to the ‘flying’ needle lace that adorns much Elizabethan embroidery.

By the 17th century, embroiderers living in affluent environments of the upper classes, surrounded by the woven tapestry, carved furniture, embossed plasterwork and silver and influenced by a growing interest in science, plants, flowers and all thing religious and mythological, were seeking to interpret these in stitch. Although many embroiderers continued to create ‘flatwork’ embroideries in imitation of the woven tapestries, others appear to have been influenced by the earlier raised techniques and needle lace developed by the Elizabethans.  These privileged young ladies practiced a diverse range of stiches and techniques on spot motifs and band samplers. The decorating of these caskets and mirrors provided a great opportunity to explore the potential of these stiches and patterns, and many girls spent years working on such projects.

Professional embroiderers who travelled the country visiting large country houses and estates largely sustained the fashion for raised embroidery. Ready drawn designs on linen or satin could be bought or drawn “in house” along with craved hands and fruit that would later be placed on work. These peddlers knew exactly which scenes would attract the most customers, and by drawing figures dressed in the latest fashions, young girls found them irresistible. These early forms of embroidery kits could go a long way to explain the similarity of design and choice of motif in many historical pieces.

Stumpwork objects displayed a high level of imagination in design, and predominately adorned with pictorial images drawn from biblical stories and classical mythology.  Other popular images were large formal portraits often framed in oval cartouches. What ever the main subject the background was enlivened with animals, insects, birds, trees and buildings. These were joyously placed around figures to fill spaces, sometimes in a more ordered way, sometimes in a more playful and haphazard way.

The embroiderer copies many motifs without changing the scale, which had the effect of merely adding to the fantastical nature of the scenes.  Most of the motifs were taken from printed sources, of which there where many to choose from. New pattern books, herbals and bestiaries were circulated, many thorough in their chosen subject; one published in 1630 by Thomas Johnson was called A book of Beaste, Birds, Flowers, Fruits, Flies and women, exactly drawne with their Lively colours truly described.

Stumpwork, although always used to adorn luxury objects, never maintained the formal repetitions, you see in many of the decorative arts. Though pictorial in nature it developed a rich symbolism of its own, which was largely informed by the turbulent years from Charles I through to the restoration. Many of the male biblical characters in these scenes, as well as the regal lions, bear some resemblance to Charles I or Charles II. Portraits of monarchs were occasionally stitched, and are instantly recognisable.

Embroiderers sometimes expressed their loyalty to the royalist cause through emblems or hidden images. The caterpillar, it has been suggested, is a badge of Charles I and a butterfly, oak and acorn badges of Charles II. One could choose from a splendid range of subjects, including sheets of flowers, fruit, birds and animals. Carnations suggested love and bees diligence and orderliness. Many embroiderers would know the meaning of each motif, but many where chosen just because they liked the curved line of the petal or the potential for stitchery within a snails shell or lions head. The restoration of Charles II brought more literal approach to this symbolism.   The figure of Charles II , became synonymous with that of king Solomon . the marriage if king Solomon to the queen of Sheba is one of the more common themes and represents the marriage of Charles I to Henrietta Maria. Charles II and Catherine of Braganza were also represented. Other scenes from the Old Testament such as Esther and Ahasuerus were also popular and recurred again and again, however always varying through the different applications of embroidery. Work by the amateur embroiderer ranged for basic to works that showed great skill.at its peak both amateur and professional embroideries could be highly intricate and inside many caskets lay three dimensional gardens in sunken trays.  Over a period lasting a few decades these domestic embroiderers of Stuart England worked with remarkable industry and zeal to create a wealth of panels and boxes, caskets and book covers, as well as cushions and mirror frames, all in the raised embroidery style which the Victorians renamed stumpwork.  Although most of the large Victorian private collections are now dispersed, this has ensured that a larger body of people can enjoy this Stuart inheritance, either as owners or by visiting one of the many public collections, and after three centuries stumpwork once more enjoys a growing popularity among embroiderers.

• A painted calico background is often used, however you may prefer to work on linen or silk.

• Stranded cottons, perlé, coton a broder, and other threads of your own choice may be used.

To construct your figure you will need

• Paper covered or florist wire – can be used to produce hands and antenna for insects, wires can also be used to edge fabric or button hole shapes. 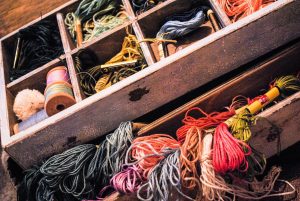 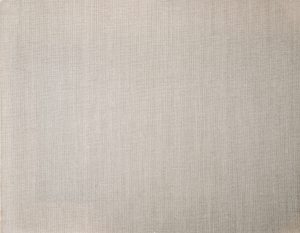 A Guide to Embroidery Fabrics 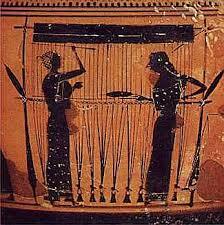 A New Year, A New Skill! So, you’ve decided to take the plunge and try Embroidery. Congratulations!

Promotions, new products and Workshops directly to your inbox.

Learn tips from a professional , these quick fixes will alter you embroidery forever.